Help car drivers to shift their usual transportation mode from car to electric bikes in rural areas. E-bike2station will offer to 40 car drivers an electric bike rather than a car for their regular tracks from home to train station. At the end of experience, these new bikers, if they are convinced, could buy their bike at reduced costs.

This project started last year. In the previous edition, 16 people left their car in order to travel by bike during one complete year.

The bike could advantageously replace cars for most city travels. It is less obvious in the rural areas however (note that Belgium is a densely populated country, even in the rural area). Electric powered bikes are becoming more and more popular now. Nevertheless a key modal shift would articulate its use with the train in rural areas. The use of ebikes in rural areas has still to be developed. So we would lend an electric bike and accessories to 40 car drivers. Those bikes would be used to travel from home to train station everyday.

In previous edition, bikers drove into town. But many projects destined to promote the bike in the city already exist. For this new edition, we would go to the countryside to develop cyclist dynamic and access to small train stations.

The objectives of this project are to encourage modal shift from car to electric bikes, improve complementarities between bike and public transport, affirm the role of stations as intermodal platforms and give a positive image of the bike and the train station. By promote the bike, it's encourage a modal solution more green and efficient to join a station with more space for services and less for parking spots.

Providing assistance to people is the best method to assure behavioral changes. In our previous edition, all the users bought their bike at the end of experience. 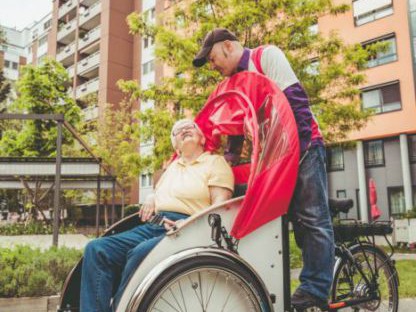